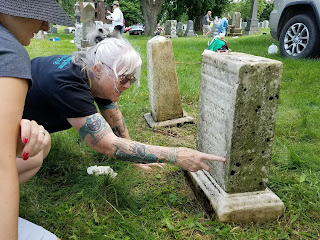 How did people pick out their gravestones before the internet? Maybe you want a big cross or a small rectangle. Fancy script or an image of a person. In the past, help with these options came in the form of from a travelling salesman carrying a big book filled with images of stone shapes and colors, etched plates, and examples of lettering. This was just one of the neat history facts unearthed at a gravestone cleaning workshop at the historic St. George’s Cemetery in. Newburgh.

Cemetery expert and Town of Delhi Historian Marianne Greenfield led the session on Saturday, June 22 which covered gravestone varieties, construction, and the care and restoration of stones which can be hundreds of years old. As owner of Delhi-based Gravestone Cleaning Service and member of the Association of Gravestone Studies, she is familiar with the right way to clean a gravestones using methods that are both environmentally and historically sound. 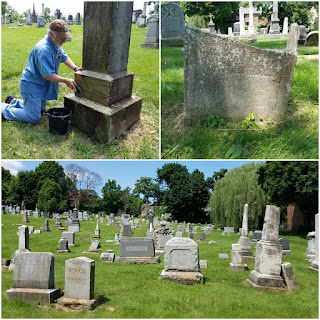 Greenfield’s approach to her work abides by the tenant of archaeology “to do no harm.” Household cleaning products are disastrous to stones. Chemicals like bleach work against the process or preservation by disrupting the matrix that gives the stone its integrity, particularly for very thin marble varieties. Gravestones are porous and absorb liquid. The only cleaning solution Greenfield uses is D/2 Biological Solution, a biodegradable liquid that removes stains caused by “biota,” or natural substances, like mold, lichens, mildew and algae. It is safe on architectural materials such as marble, limestone, granite, stucco, and more. The solution is non-toxic and doesn’t even require gloves or ventilation. It is safe to use around plantings and continues to clean historical monuments across the U.S. including the White House and Arlington Cemetery.

Greenfield’s workshop participants sprayed D/2 on the stones and let it sit for 15 minutes. What to scrub with? Not wire brushes which can nick surfaces creating opportunistic cracks that expand in winter when ice enters. Greenfield starts with a chiseling motion with wood chopsticks followed by firm but gentle motions with a plastic scrub brush. Greenfield discourages the use of weed killers like RoundUp which are not only environmentally toxic, but kill grass surrounding the stones creating brown sludge which loosens stones and leads to instability. 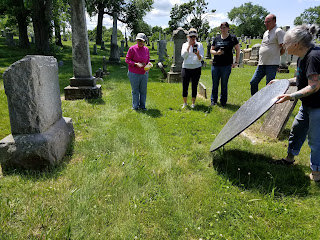 Many stones were covered with layers of lichen, which is a reaction between fungus and algae. Despite public perception lichen is not harmful to the stones and actually acts as a preservation feature. An acid eating theory was disproved when studies of the faces of newly-scraped lichen-covered stones revealed the lichen side to be 1/8” thicker than the side that was exposed to rain which contains elements of pollution. After scrubbing the stones were rinsed with water.

Greenfield pointed out different styles of gravestones at St. George’s Cemetery including obelisk, white bronze, and sandstone tablets. Some stones have a “popped” textured base that looks like crinkled paper. Other stones can have images of people. Greenfield talked about Civil-war era stones with faces that were created when photography was still in its infancy. 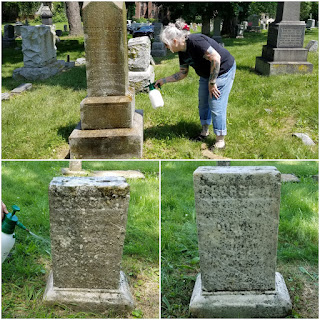 Participants saw a demonstration of “triangulation” during which an angled mirror directs sunlight onto the face of a stone, illuminating its surface for better visibility and photography. Greenfield touched on gravestone rubbings, a practice of recording etchings by covering an etched stone with paper and rubbing the surface with a wax crayon. Doing this ethically means not letting the wax touch the stone and she recounted a story about coming across a gravestone smeared with wax which transferred when a piece of paper was flipped and used twice.

The workshop was an informative and accessible way to walk through this magnificent cemetery and get close up with restoration practices that preserve history. 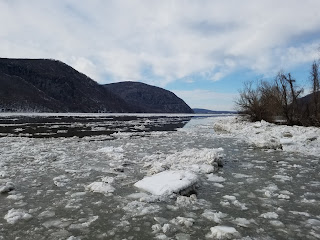 During warmer months the Hudson River buzzes with sounds from boats, tourists, wildlife and waves. In winter new sounds emerge as the water continues to flow underneath frozen chunks of ice. Visit the river after a stretch of deep cold and you’ll find the sounds of pops and cracks punctuating the otherwise silent air of a winter day. 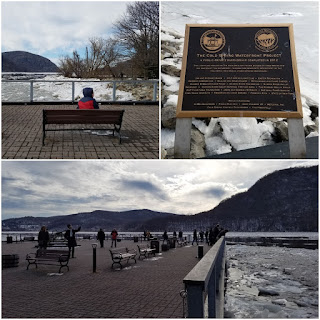 The Village of Cold Spring is a great place to hear the sounds of a river in a state of deep freeze. This village in Putnam County borders the Hudson with a park. Part of the Cold Spring Waterfront Project, the park’s lighting and railing on an existing large brick-paved dock were added in 2012. The scenic look out is an hour and 15 minutes from Grand Central Station and an easy walk from the train station. 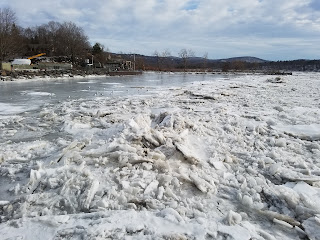 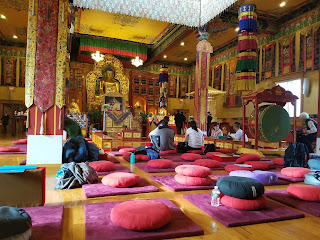 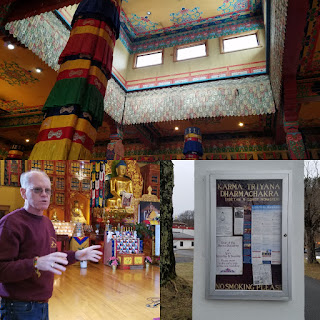 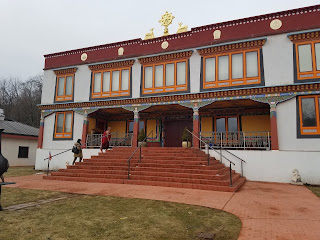 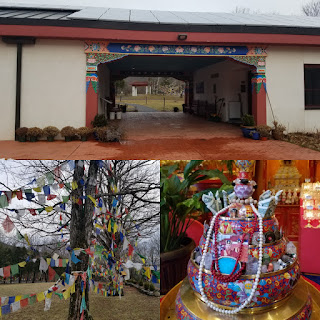