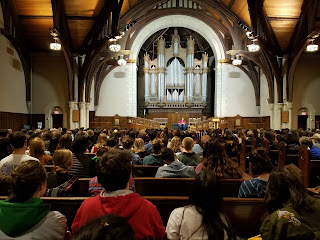 Tough conversations sometimes don’t end up happening. When topics like race, sexuality, poverty, gender, health, death, and finance are hard to talk about, progress slows, misperceptions remain, and solutions don’t emerge. Issues can suffer when we hold out for the perfect face to lead a movement, not knowing if that person will ever come—or if they even exists. Writer Roxane Gay’s 2014 book Bad Feminist focuses on the personal qualities of people who consider themselves feminists and examines our perceptions of who is “good enough” to speak and lead.

Each year Vassar College honors a writer as the William A. Starr Distinguished Lecturer. Students in the school’s first-year writing seminar program are assigned a book to read and the author is invited to campus to speak about their work. Bad Feminist was chosen as the 2018 book. Gay came to Vassar's Poughkeepsie campus on Wednesday, November 7 for her talk Roxane Gay: With One N.

Gay is an essayist and contributing writer for the New York Times. Bad Feminist is a collection of insightful and funny essays about how we view women and work in their service when they, or ourselves, enjoy things that are considered “non-feminist.” Can a feminist wear makeup and dresses? Can they have children? Can one love chocolate? Gay stressed the importance of embracing women who contradict themselves, and encouraged us to reject strict tests to label someone a feminist. Gay’s version of feminism welcomes women who are stay-at-home moms and those who like short skirts. But where do we draw the line? What is not acceptable? A member of the audience asked just that and Gay said the one issue we can’t compromise on is forbidding women to chose abortion. Gay broke up her talk of serious topics with her now-not-so-secret fondness for maxi dresses and how she has almost no knowledge of cars and no desire to learn how to solve a vehicle crisis on her own.

Gay talked about her struggles as a first-year college professor: the usual fears of public speaking and memorizing names, but also being the only black professor in her department at Eastern Illinois University and sharing that sense of aloneness and isolation with the few black students in her classes by ensuring they knew she was available outside of class if they needed to talk. A humorous frustration was trying to understand why her students wore breezy basketball shorts in the freezing Midwestern winter.

Gay’s reading happened the day after mid-term elections and she made sure to recognize the leadership gains by women, people of color, and candidates from non-Catholic or Protestant religions. Despite a loss, the margin of the gubernatorial race in Texas was a victory that laid out a blueprint for other Democrats. She talked about the challenges faced by candidates of color like Stacey Abrams and how polling voters is unreliable when race is involved as people lie to hide race bias. Gay touched on the role of trauma survivors in the progressive movement, particularly in Me Too stories. We need to be mindful about not encouraging survivors to cannibalize themselves for the greater good by giving in to people who don't help the movement by latching on to a personal story and pry out more juicy details.

Gay encouraged students of elite privileged institutions like Vassar to examine their school’s role in social movements by, for example, seeing where the school’s endowment is being spent.

The audience asked questions about the writing industry and I really liked Gay’s remedy for writers block: treat writing like a job. Her talk about genres helped the audience learn to use them in different ways: nonfiction is more immediate and urgent, while fiction gives readers and writers more time and space to explore an issue. Gay talked about social media as a great connector for writers to find each other, but to avoid insulating ourselves in social bubbles.

She talked about Twitter being conducive to conversation but limited in reach. Many people, including the ones we want to reach, simply are not using it. How do we reach the unreachable? By prioritizing our resources for groups outside our bubble, and knowing the difference between expending energy on people who didn’t vote and not wasting it trying to understand the mysteries of disaffected white men.
Posted by Lauren Berg at 11:05 AM