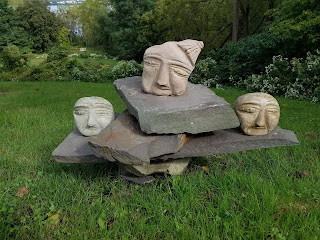 Newburgh Open Studios was last month and one of the stops was Glenlily Grounds off Grand Avenue. The site featured 29 artist with works throughout the 11-acre property that incudes fields, steep hills, and a path through woods. Mediums included metal, acrylic, and more. One display was a group of carved stone faces by Renee Ludwiczak at the edge of a hill overlooking the Hudson River. Some faces hung on a tree or nestled in the base and trunk of a tree, while a grouping sat upright on flat stones. The works look like miniature expressions of the Moai statues of Easter Island, a remote region off the coast of South America. 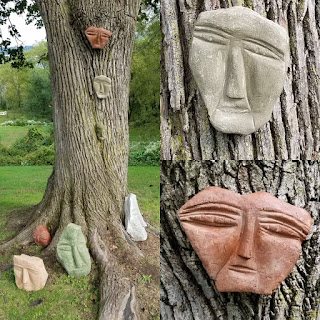 Moai are large stone carvings shaped as humans. Over 900 statues have been found, the tallest measuring over 30 feet tall. The works are a spectacular feat considering they were created and transported between 1250AD and 1500AD. Just as Ludwiczak’s pieces were carved from different varieties of stone, Moai were formed from such materials as compressed volcanic ash, basalt and trachyte.  Debate continues today as about how the statues were transported from a quarry where they originated. Theories extoll dozens of people rolling the statues across the ground on logs or “walking” them upright with ropes. Some statues found lying on the ground are thought to have fallen accidentally during their walk and could not be lifted back up. Researchers, puzzled by the existence of unfinished statues on this desolate island, seek to understand why people left. Land clearing, rat infestation, climate change and deforestation made the region unsustainable for agriculture, fishing, and farming, and the population was affected by Christian missionaries who encouraged natives to abandon their culture and customs.
Posted by Lauren Berg at 3:19 PM