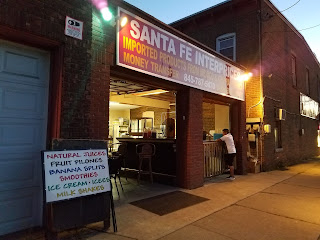 I drove by this place and it was so open and bright and people were outside so I stopped and left with a juice. A big sidewalk sign outside the already welcoming façade of Santa fe Interprices on William Street in Newburgh draws people in with juices, ice cream, and milkshakes. Also on the menu is the Central American specialty horchata, a pale rice-based protein drink with cinnamon and morro seeds. I picked up a mango-guava juice. Another popular juice variety is blackberry or strawberry with chia seeds.

The restaurant is connected to a grocery and is run by Honduran proprietors Jorge and his father who opened the establishment 5 years ago. They specialize in foods from Central America especially rice, beans, cheese, and bread. Friday feature chicken and pork tamales. Interprices is open 7 days a week and opens early and closes late. 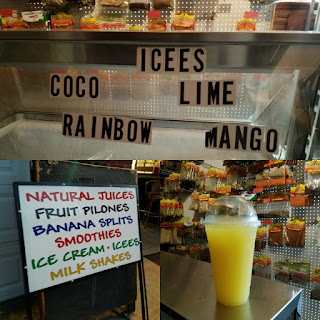 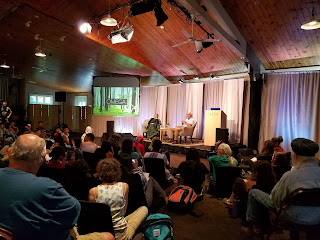 I first heard the name Vandana Shiva as the name of a chocolate. Lagusta’s Luscious chocolate shop in New Paltz has a series of candies named after feminist icons. The one called Vandana Shiva is a piece of bittersweet chocolate with bits of vanilla bean, cinnamon and chilies. Its unique gritty texture is the result of omitting the surface-scraping “conching” process. Conching is what produces the familiar smooth texture of European chocolate. Instead, Vandana Shivas are stone ground which produces a granular chocolate.

The real Vandana Shiva is a world-renowned environmental leader, activist and eco-feminist. Born in India in 1952 to a farmer mother, she has spent decades defending indigenous knowledge and biodiversity. Campaigned against corporate patents in seeds, received the Right Livelihood Award in 1993, and serves as an advisor to governments on issues including women, food justice, and third world countries.

Vandana Shiva was in the Hudson Valley for Omega Center’s Making Peace with the Earth retreat on July 6-8. She spoke about colonization, the process of establishing control over an indigenous population, and the ensuing clash of not just cultures but economies as well. She brought up the famines in India after the country was overtaken by British rule. When war was brought to an end by treaty in 1765, the British East India Company claimed lands in the Ganges river valley. The effects of scarce rainfall were compounded by British practices of charging rent for land people were already on, war levies, and export crops replacing food. During the Bengal famine of 1770 almost a third of the country’s population starved to death. Colonization caused native populations to lose control of their independence. British rule took what didn’t belong to them and turned it into a source of rentals. Taxation increased and forced people to sell food stores meant for protection against famine. 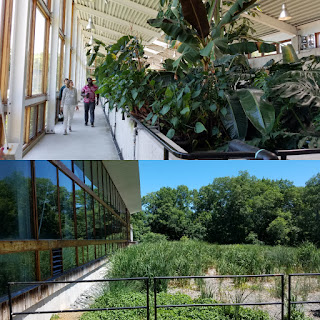 Omega: www.eomega.org
Posted by Lauren Berg at 7:05 PM No comments: