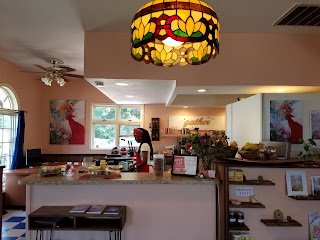 Lately I’ve been reading about ghee. It’s like butter if butter could get more buttery. A popular fat in Indian and South Asian dishes, it’s made by heating butter until it reduces and the solids (the dairy proteins) separate and are drained out. The end product is 100% fat version of butter which is usually 80% fat. It’s appropriate for higher heat cooking and imparts a nutty flavor in place of the burned scent that fast-melting butter can leave behind.

Anyone can make ghee at home with a stick of butter and 10 minutes, or you can pick up a jar of homemade ghee along with lunch at the Red Dot Kitchen in Wurtsboro. This vegetarian restaurant offers traditional Indian dishes: soups and sides such as daal (lentil soup) and pakora (battered vegetables in sweet chili sauce), lunch and dinner options like tofu curry and kulcha (naan stuffed with seasoned filling). For breakfast are pancakes with coconut sauce, multigrain waffles, and Indian breakfast potatoes. I had the protein burrito, a spinach tortilla wrap filled with brown rice, black beans, veggie chicken nuggets, kale, tomato, red onion, and a lemon-tahini dressing. House-made canned ghee is available and is found in many Red Dot dishes including brushed on the breakfast paratha wrap and drizzled on the sourdough bread starter.

The Red Dot is one of two restaurants, the first presently in the mountain town of Frasier Park, California.  The seasonal menus of both are packed with vegetables and Indian flavor. Paired with the restaurant’s welcoming, bright, peace & love vibe the experience is something even a carnivore can savor. 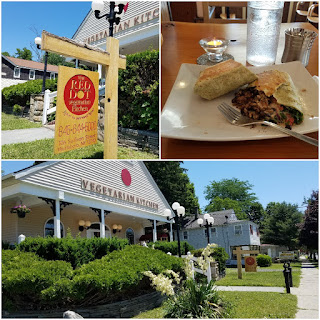 With a current population of almost 30,000 the City of Newburgh has changed dramatically since native Waoranek people lived here in dome huts and paddled the Hudson River in dugout canoes. During the 20th Century deaths from infectious disease decreased dramatically in the U.S. largely due to public sanitation. In 1908 Jersey City, New Jersey was the first U.S. city to routinely disinfest public drinking water supplies and other cities soon followed the model.

Newburgh’s Water Department on Little Britain Road in Newburgh is home to the branch’s offices and water treatment operation. The plant, staffed 24/7, is 1A licensed which is the highest in the U.S. and is rated to process 8.85 million gallons per day. 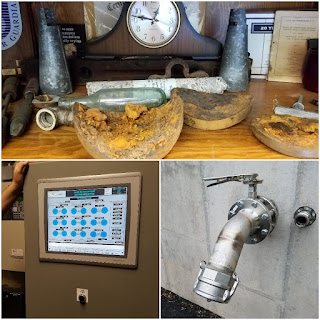 The plant offers tours every second Saturday for the public to view the site’s buildings, operations, offices and walk the path water makes during filtration. I took the tour in June with Water Superintendent Wayne Vradenburgh. It started at the garage and leads to the nearby chemical building which houses new digital meters. All activity in the space is recorded and monitored daily. Vradenburgh noted the facility’s transition from treatment with gas to much safer liquid chlorine, and how all grease used in operations is food-grade. The space’s square vats churn the water, bringing bottom levels to the top. We followed the facility’s path alongside floculator tanks, underground settling tanks which must be manually cleaned, filters, and the lab which tests temperature, fluoride, alkalinity, chlorine, pH and color. Staff send out samples for bacterial tests and post water quality reports on the City website. 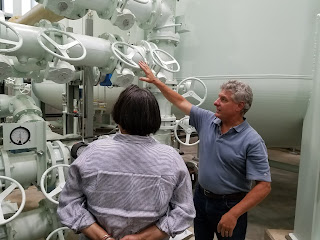 The site’s administrative office sends out water bills and generates boil water notices. Staff read residents’ meters each month and help them find leaks. Vradenburgh noted City Council had just approved staff to investigate new state-of-the-art meters that will eliminate staff home visits and enable customers to manage their use with a phone app. The office is filled with historical photos and artifacts that document the changes in the department brought on by technology and industrialization. Photos show old steam shovels and early plant construction. A shelf unit holds antique bottles unearthed in digs, early leak detecting equipment, pipe samples, lead service line, a procurement log from the 1920s, and meters used in the early 1900s. One photo showed men at work wearing black top hats and on a shelf sat a sample of wood water main circa 1800. 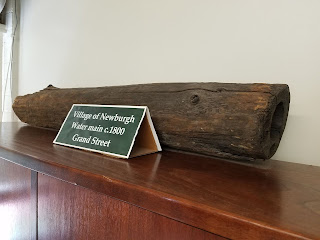 After walking through the basement’s supervisory control panel we headed to the new horseshoe-shaped Granular Activated Carbon (GAC) plant. This is the last step for chemical absorption from the finished water. The GAC building holds 18 vessels and from a control panel staff can analyze the process and identify problems. Vradenburgh explained how the panel settings were changed to manage hydrant flow during a recent fire in the City. A giant dehumidifier attached to the building prevents the tanks from sweating as they fill with the cold water the system draws from the bottom of the Ashokan reservoir in Ulster County. The vessels are arranged in a lead and lag pattern and inside are cone-shaped screens that hold carbon above the water. The system can process 8.85 million gallons each day before individual tanks are taken offline to replace the carbon every 1 or 2 years. 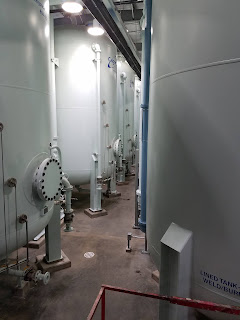 Vradenburgh said a congressman from Flint, Michigan, which still suffers from dangerous levels of lead in public water supplies identified in 2015, visited site recently and was impressed with the measures taken to protect Newburgh’s water. The tour provides a glimpse into just how much work goes into maintaining drinking water.
Posted by Lauren Berg at 11:08 AM No comments: