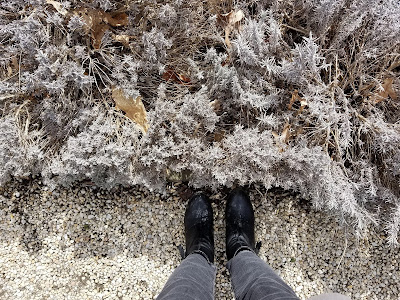 “Vajra is connected with the East, the dawn, winter. It is a winter morning, crystal clear, icicles sharp and glittering, The landscape is not empty or desolate but is full of all sorts of thought-provoking sharpness.”
-Cutting Through Spiritual Materialism, Chogyam Trungpa

Bard College in Annandale-on-Hudson stretches across nearly 1,000 acres. One of the most historically dense sections is a rectangular walled garden overlooking the Hudson River with a view of the Catskill mountains in the distance. Designed around 1903, Blithewood is an Italianate garden, part of Blithewood Estate which includes a mansion donated to the college. Its angular geometric structure includes paths and beds, statues, semi-enclosed areas, a water feature in its center, a copper-roofed pavilion and two pagodas.  The garden is open year-round and if free to tour. 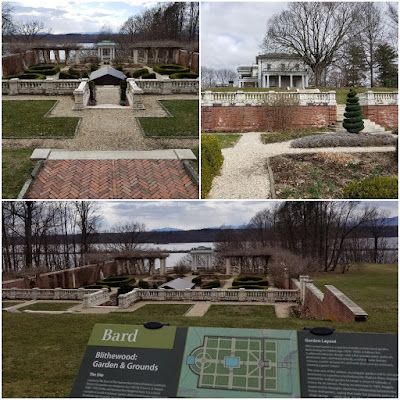 The college celebrated the garden’s 115th anniversary by kicking off a campaign in 2016 to facilitate its renovation. Because the site is open to the elements year-round deterioration from over a century of freeze/thaw cycles is evident. Plaster from the columns of the pavilion is falling off and brick mortar is crumbling.

Last year a new development in the project was the installation of interpretive signs for visitors. The Bard Arboretum was awarded a grant from the Hudson River Valley Heritage Area to add signs to the site which display the garden’s structures and history. The signs were researched and designed by a Bard graduate student then built in 2017 by local firm Terrabilt which specializes in interpretive, informational, and wayfinding signage that is durable and sustainably constructed.

The hillside below the garden is overrun by invasive plants including common reed and Japanese knotweed and is irregular and steep, making it difficult to maintain. The school implemented an environmentally sound solution by leasing goats to remediate the 1.5-acre hill. The goats eat the weeds for weeks at a time, needing only water and some human help for dense sections. The NYS Department of Environmental Conservation awarded the college a 3-year Invasive Species Rapid Response Grant to host the goats for three growing seasons through 2019.