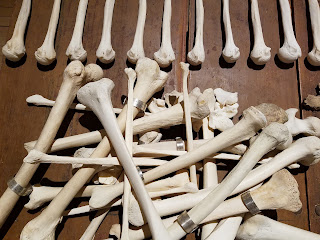 How can you walk by a grid of bones on a table and not read the story?

Last month we took a trip out of the Hudson Valley to MASS MoCA, the Massachusetts Museum of Contemporary Art. Set on 16 acres of an urban section of North Adams, Massachusetts, the site’s 26 buildings are connected by elevated walkways and courtyards. The Hoosick River flows through the site which has an unmistakably industrial vibe. Since before the Revolutionary War, the area was instrumental in the manufacture of shoes, hats, cabinets, and armor plates for a Civil War ship and components for the atomic bomb in World War II. Manufacturing ended in 1986 and the site was transformed into a museum after staff of Williams College museum of Art sought an economic space to exhibit large works that would not fit in conventional museums. MASS MoCA opened in 1999. 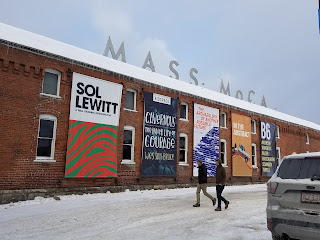 Artist Jenny Holzer’s giant light projections, carved stone benches, and posters make up her campus-wide exhibit of words and messages. In the East Gallery Lustmord Table features arranged bones on a wooden table, a project rooted in the war in former Yugoslavia. Attached to some bones are metal bands engraved with words from sex crimes perpetrated against Muslim women and girls. In the 1990s, 20,000 to 50,000 women endured rape and forced pregnancy, events the Golden Gate University Law Review called “one of the most egregious orchestrated human rights violations against women in this century.” Lustmord is German for “sexually motivated murder.” The bones were sourced from decommissioned medical samples and teaching materials. 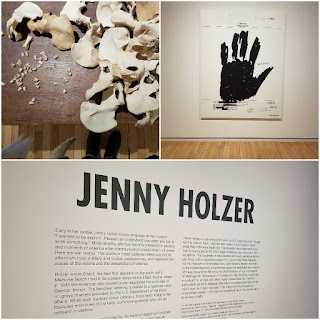 Ice on the hudson 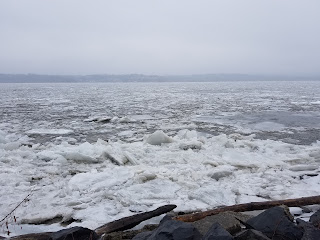 “One of the reasons there are so many terms for conditions of ice is that the mariners observing it were often trapped in it, and had nothing to do except look at it.”

― Alec Wilkinson, The Ice Balloon: S. A. Andrée and the Heroic Age of Arctic Exploration

One of the most striking places to see the effects of below-zero temperatures is on the Hudson River. Though jet skis and leisure boats are not in season, the river remains a year-round shipping route for petroleum products as well as a source of drinking water for over 100,000 Hudson Valley residents in communities such as Poughkeepsie, Highland and Rhinebeck. 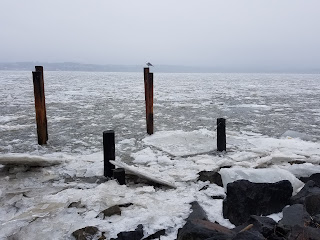 When the Hudson freezes over the route is cleared by icebreaking boats. This past January the 140-foot U.S. Coast Guard Penobscot Bay icebreaking tug made it’s way from New Jersey to Albany. Can ram through ice up to 3 feet thick with the aid of a lubrication system that forces air and water between the boat’s hull and ice.
Posted by Lauren Berg at 7:57 PM No comments: