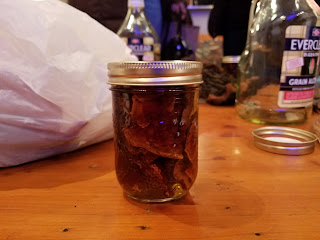 What do you make with mushrooms and alcohol? A reishi mushroom tincture was the final product of Reishi & the Power of Medicinal Mushrooms, a workshop on February 16 at the Moon Infospace in Newburgh. Hosted by Rochester-based fungi cultivator Olga Tzogas of Smugtown Mushrooms, we learned about medicinal mushroom varieties, sources, preparation, as well as some fungi lore.

Medicinal mushrooms have been around for centuries and utilized by countries the world over. Olga presented a slideshow of photos and uses of common medicinal varieties. Tooth fungi is a strong antiflamatory which can rebuild nerves and treat crohn’s disease. Reishi is a liver detoxifier and improves oxygen utilization. Maitake regulates blood sugar and birch polypore can substitute for a bandage. Turkeytail, one of the most common and studied varieties, can expel dampness from lungs and help build muscle. Shitake improves circulation and offers protection from nitrates which are found in bacon. 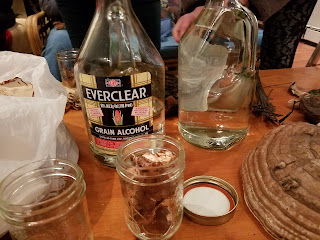 Mushroom images appear in prehistoric rock paintings. A variety called amanita muscaria, commonly recognized as a red cap with white spots, takes many forms: from Christmas tree ornaments to an iconic role in Nintendo’s Mario franchise. Mushrooms appear in a fresco depicting Adam and Eve within 12th Century Plaincourault Abbey in France, as well as in Alice in Wonderland and the 1940 Disney film Fantasia.

Olga helped participants create tinctures using a simple pack-and-cover method. She brought her own farmed Reishi pieces which we broke up and packed into jars which were then filled with alcohol which both preserves and extracts material as it sits for 6-8 weeks. The next step in this “double extraction” process involves draining, adding water and simmering the solution into a viscous liquid that can be consumed in tea form. 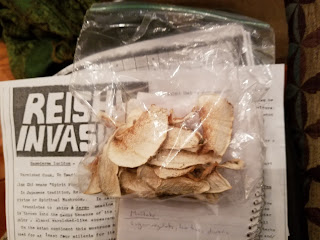 Olga’s knowledge of mushrooms is vast: she talked about industries using mushrooms as a substitute for plastic in packing material and how they “create life from death” by breaking down dead and decaying plant matter on forest floors. Though they are superficially plant-like, mushrooms are actually genetically more similar to humans. Olga’s passion in the mushroom kingdom is for medicinals. Utilizing them as both food and medicine is not only a great way to take control of how we eat and treat illness, but restores a connection between food and medicine that we forgot or never learned.