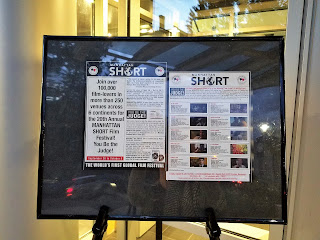 10 films for $5 = a super deal. This year was my second attending the Manhattan Short film festival at nearby SUNY Orange in Newburgh, a global festival featured 10 finalists narrowed down from over 600 submissions. The contest screened across six continents from September 28, 2017-October, 8, 2017 with 146 venues in the U.S. Finalists ranged from Do No Harm, a 12-minute gory fight to the death in an operating room, to Just Go!, a romantic and heroic tale of a man who lost his legs in a childhood accident. In Fickle Bickle a plumber takes over a client’s luxurious home to seduce a gold digger, and Mare Nostrum illustrates how a Syrian father’s reckless treatment of his daughter prepares her for the chance at a better life.

Attendees use their ballots to vote for a favorite film and favorite actor. My favorite work was Viola, Franca, a 15-minute true story of an Italian woman rebelling against her community’s tradition that dictates she marry her rapist in 1965 Sicily. The young woman, a virgin before she was raped, refused a "rehabilitating marriage," a tradition that not only prevented her from losing her “honor,” but enabled her rapist to have his crime extinguished. 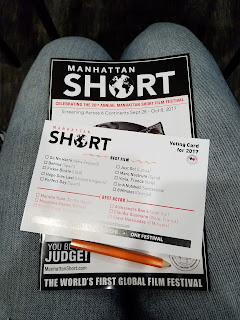 Winners are revealed after votes from all over the world are counted. The winning film of 2017 was 8 Minutes, an almost 13-minute film from the country of Georgia, about an aging magician and a countdown to the end of Earth’s daylight.

Film lovers can connect through Manhattan Short’s online features like contestant entry info, DVD shop, viewer reaction videos, and a forum for thoughts and opinions about the featured films.