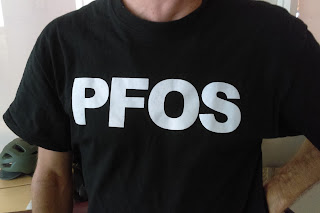 What’s in your water? Maybe medicine that was flushed down the toilet, chemicals seeping from a landfill, pesticides or fuel. The path of contaminants from their source to our drinking water was the issue at the center of the Newburgh Clean Water Project’s recent meeting.

Almost everyone who lives in or near Newburgh is familiar with the water supply’s contamination with PFOS. Perfluorooctanesulfonic acid is a key ingredient in firefighting foam and when it was identified in Newburgh’s water supply from Washington Lake, the NYS DEC took action to identify Stewart Air National Guard base as a source. The focus of the meeting of the Newburgh Clean Water Project was to educate the public about the situation. Besides offering a platform for discussion, the local action group gave a presentation on local water contamination and prepped attendees with materials for letter writing.

The chemical was first identified in 2014 and since then the Stewart Air National Guard Base as a Superfund site which requires it be cleaned up by the Department of Defense. The City offers blood testing for residents, but PFOS testing is different than the lead testing the general public is more familiar with. Not only are there fewer labs that offer the service, but the tests require a doctor’s prescription. Organizers proposed one solution: a public meeting at St. Luke’s hospital with a doctor onsite to write prescriptions. Another interesting practice that was discussed was the Department of Health’s tracking of test results. Though the agency tracks cancer diagnoses and clusters, they don’t track non-cancer health effects such as neurological and kidney issues caused by our environments. These are studied by the Center for Disease Control. 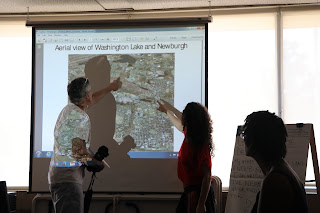 It was fascinating to learn that the City of Newburgh’s water system was designed in the 19th century when the lands were natural and pristine. Since then, the advent of the automobile and construction of the Interstate highway system moved the transportation hub from the Hudson River westward toward the intersection of I-84 and I-87.

Presenters referred to another case of contaminated water in the village of Hoosick Falls in Rensselaer County. In 2015 community members contacted the government with concerns after their own testing revealed contaminants, Perfluorooctanoic Acid (PFOA) and Trichloroethylene (TCE), in the water. This led to the village’s Saint-Gobain Performance Plastics, its largest employer, to be placed on the EPA’s superfund site list. A Superfund site is land identified as containing hazardous waste and has been identified by the EPA as being a risk to human health and/or the environment. The sites are put on a list and remediation is made a top priority. 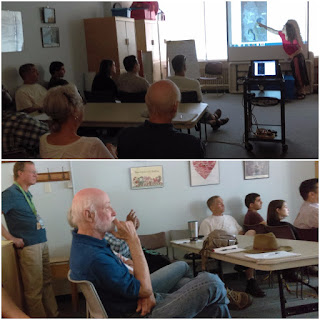 The group’s presentation included observances made during a recent walking tour of the affected areas. Aerial maps showed how the City’s water supply is sourced from outside its boundaries, limiting the City’s ability to legislate for its own safety. It was fascinating to see an unlined capped landfill in New Windsor that I didn’t know existed. Organizers explained the strategic designation of wetlands in the heart of the region we were examining. Wetlands are important for water purification, shoreline stabilization, ground water recharge, and they act as protection from floods. The map indicated, in green color, a region of wetlands sitting downhill from Stewart ANG base. The small splotches of green indicated regions that measured 12 acres or less, which are classified as insignificant wetlands. If the divisions caused by man-made roadways were combined, the wetlands region would total 50-70 acres. The map showed the proposed Pilgrim Pipeline project which would cut straight through the region.

The group distributed materials to help attendees draft and mail letters to politicians and the Department of Defense, and stressed the importance of asking smart and informed questions to politicians who are already overwhelmed. They stressed that our local water safety issue is at the same time an international issue. Urban planners, businesses, and environmental activists worldwide have this same discussion. It is possible to simultaneously have our businesses and clean water, and it’s important to not hastily blame unethical decisions for the contaminants in our water, but be mindful that they are perhaps simply the result of poor planning. The group’s mission comes from a place of a long-term solution: not fighting lots of small fires or having to renew the same fight again in five or so years for yet another chemical.