Power of the public plate 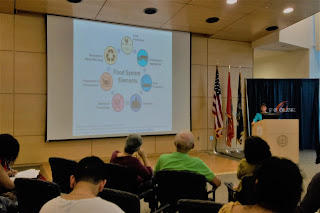 Did you know school lunch system was developed as a measure of national security? The standards were signed into law after military recruits, who had spent their early years in the Great Depression, were identified as malnourished and unfit for military service. Generals pressured Congress to enact the National School Lunch Act in 1946 as a way to ensure well-fed children developed into effective troops.

That was just one of the neat facts I learned at Our Food System: From Producer to Consumer: What You Need to Know – What You Can Do at SUNY Orange in Newburgh. The lecture’s presenter Kathy Lawrence, Co-founder and Senior Director of School Food Focus, talked about the state of U.S. food systems, how policy got us here, and how we can change. The presentation was a partnership with the Newburgh Urban Farming Fair, an annual agricultural event coming up later this month in Newburgh. The fair’s coordinator Virginia Kasinki, who is also the Outreach Manager for the city’s Downing Park Urban Farm, opened the talk with a summary of the fair’s beginnings, produce donation program and a short history of the park’s nearby farm whose seasonal pubic events start this season.

For over 20 years Lawrence has worked in policy and projects in sustainable agriculture and food justice. She opened the talk with questions for the audience about their knowledge and connection to food, from backyard garden harvests to feeding systems in institutions. Her work at School Food Focus, a national collaborate that connects school districts and food businesses, helps schools develop an effective supply chain that results in healthy meals for students. The organization’s mission stems from the all-too-documented connection between student success and poor diet, disrupted eating patterns, and limited access to healthy food.

One key event brought about the idea of connecting school districts to strengthen their bargaining power. A district was receiving containers of yogurt from Dannon that were too large for their elementary students and food was going to waste. The school approached the manufacturer about reducing the package size, but didn’t get the response they hoped for. School districts have such a low price point per meal per student, making it essential that they be exact with their demands. School Food Focus connects districts and successes include creating an ingredient guide to enable schools to identify harmful ingredients and creates new lines of items. The organization was instrumental in pressuring large chicken producers like Tyson and Perdue to eliminate antibiotics. Chicken is number one protein served across the country. 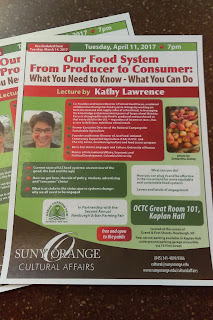 Lawrence helped the audience divide the food system into three categories:
The current shape of our food system is not an accident and it’s not the natural path of progress. Lawrence talked about how policy got us here and how her organization is using it as a lever for change, with the goal to make the default choice be the easiest and healthiest choice. Lawrence talked about the roots, current state, and future of the Farm Bill which connects what’s on our plates to producers, and the Child Nutrition Act which serves 30.4 million children in our schools.

School Food Focus’ core beliefs are that we’re all connected and collaboration is essential. Lawrence stressed the importance of making your voice heard and how clear, informed, organized citizen action gets things done. She talked about the importance to letting lawmakers know when we want change. Even though issues needing change appear to be all over the news and social media, that doesn’t mean lawmakers are in the loop. Lawrence talked about not giving lawmakers the opportunity to say “we are not hearing from you people.” Even five or six phone calls about a particular issue can make them pay attention.

What can we do? Everyone knows about “making your dollar count” but we shouldn’t stop there. Don’t know where to begin? Lawrence says that’s not uncommon. We can contribute to public comment periods, sign up for alerts that outline who, what, and where about your message. Making activism a group activity can be fun and empowering.

A citizen push for legislation, rules, and protections can snowball. Just Food’s network of fresh food training and resources for the New York City community began with just a handful of volunteers, and the USDA’s Beginning Farmer and Rancher Development Program (BFRDP) developed as a response to public input.

Today we find plenty of bad news about government and food systems and policy, but there’s a lot of good happening. Change starts on a personal level and Lawrence encouraged the audience to find their passion. Kids can’t wait for healthy food.

School Food Focus: www.schoolfoodfocus.org
Posted by Lauren Berg at 9:31 AM