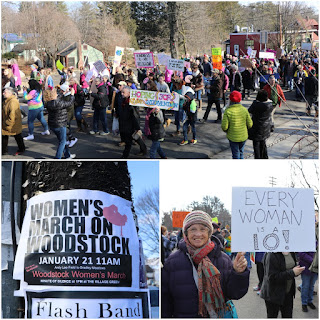 Earlier this month I read Elie Wiesel’s 1960 book Night about his experience and escape from Nazi concentration camps during the Holocaust. His first-hand account matched a face to this time in history and I researched more about Hitler’s rise, the camps, targeted populations, and the treatment of people. I learned about Wiesel’s life-long activism to protect victims and share stories about oppression and genocide.

Last month I attended my first ever march. Hundreds of people convened at the tiny Ulster County town of Woodstock for the Women’s March on Woodstock on Saturday January 21. The group’s mission, along with that of marchers at similar events worldwide, was to “send a message that we stand together in solidarity and expect elected leaders to act to protect the rights of women, their families and their communities.”

Women, men, and children brought signs with messages about women’s reproductive health, immigration, gender issues, harassment, the environment, healthcare, diversity, science, freedom, and patriarchy. It was reassuring to see people of all ages, from strollers to walkers, sharing the same vision for our future. 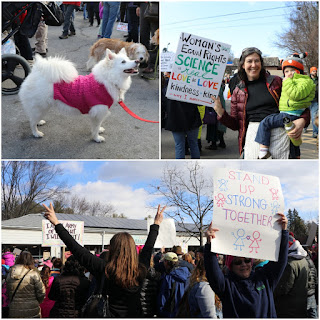 Following that, last week I attended Defend Planned Parenthood: A Counter Protest in Newburgh outside the Planned Parenthood office in Newburgh. Anti-choice activists chose Saturday, February 11 to hold demonstrations against Planned Parenthood clinics nationwide, and counter events in support of the organization’s health services were organized as well. Policymakers often treat gynecological care differently from other forms of care, but ask any woman and you’ll find that reproductive healthcare is a fundamental part of life. I’m a patient at the Newburgh office so I felt attendance was important. Lots of drivers passing the group sent waves, shouts and beeps of support,


I invited people to attend and one woman told me my presence may not be a good idea because someone who opposes me could snap a picture of me and use my image in a skewed and vulgar way to further their own goal. True, but fear is paralyzing. I heard it quoted that we overestimate danger. It took me a long time to convince myself of that. We can’t make everybody happy, and the fear about our perception to the public will prevent us from doing almost anything.
Posted by Lauren Berg at 11:09 AM