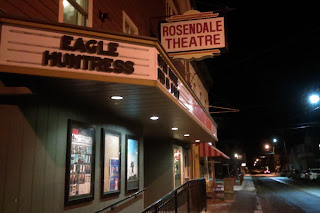 Do an image search for Mongolia and you’ll find women in colorful fur hats, camel races in the barren plains, and giant golden eagles perched on the arms of their trainers. When I learned The Eagle Huntress was showing at the Rosendale Theatre this month, I knew I wasn’t going to miss the beautifully-shot documentary that's been sweeping up awards worldwide. The film follows Aisholpan, a 13-year-old girl from Mongolia who follows her family’s tradition of eagle hunting, a form of falconry. She is the first female in her country take the challenge and the film follows Aisholpan and her father as they capture an eaglet from a cliffside nest and train it to catch game like rabbit and fox. Golden eagles have a lifespan of 30 years and after their time with humans, Mongolians typically them back into the wild after about 7 years.

About a third of the Mongolian population, including Aisholpan’s family, remains nomadic. The film followed her family as they pack their house into a truck and take off for their seasonal home. She and her siblings live at school during the week and she returns home on weekends to train her eagle. 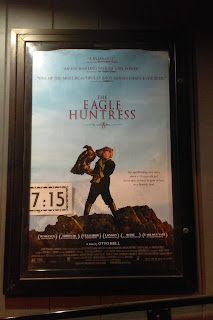 Aisholpan and her father travel on horseback to the annual Altai Eagle Festival in Bayan Olgii. The contest measures participants’ skills in appearance, horseback riding, and control of their birds. Aisholpan and her father next ventured on a hunting trek for fox in the snow covered mountains to test her skills. Temperatures during these hunts can plunge to -30, and scenes of Aisholpan chipping a hole in an iced-over lake so her horse can drink made the 30 degrees we’ve seen this month in New York feel more bearable.