Clinker and the bad ear 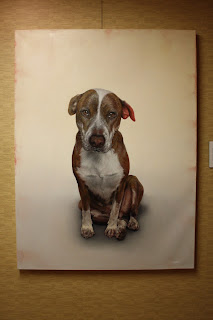 If there’s one portrait that defines the recent art exhibit at Orange Regional Medical Center in Middletown, it’s Clinker and the Bad Ear by Dana Hawk. The large oil on canvas brings visitors face to face, love it or hate it, with an intense puppy dog eyes experience with Clinker, Hawk's adopted pitbull-mix. 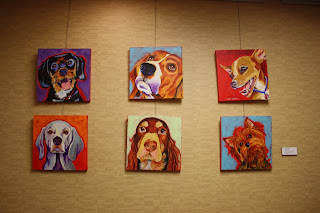 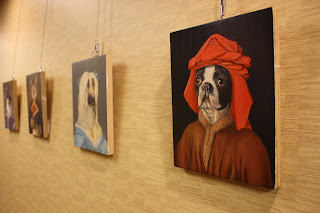 Constant Companions is part of the Orange Regional’s Healing Arts Program which organizes a gallery of changing art exhibits, as well as integrating art into spaces throughout the hospital. Murals and paintings of the Hudson River and other regional sights make for permanent décor with a local connection. 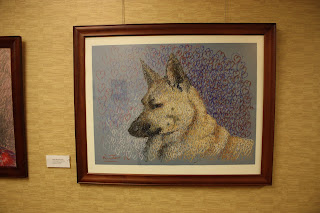 The program’s mission encourages incorporating the holistic effects of art into ORMC’s services: “Art offers unique opportunities to engage the whole person through restorative moments that provide comfort and inspiration. We present the work of local artists to strengthen community ties and to highlight the creative talent of our region. A consistent theme of Orange Regional’s art collection is the beauty of the natural world and the Hudson Valley.” 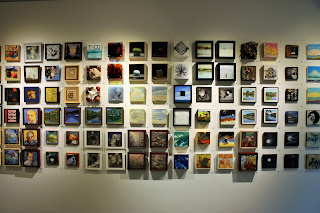 So “quality over quantity” is the way to live, right? So they say, but you can have the best of both worlds at Art in Sixes. This annual small works group show at the Alliance Gallery in Narrowsburg is in its 11th year and features works in all mediums: fiber, stone, paint, metal, wood, paper, and more. 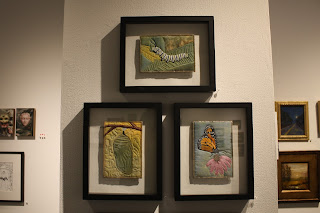 The main requirement for submission was that each piece be no larger than 6 inches in any dimension. The gallery’s walls are filled with over 300 pieces, and all are for sale and reasonably priced. The Alliance Gallery is organized by the Delaware Valley Arts Alliance. Founded in 1976, DVAAA sponsors programs in the visual, performing, literary, and media arts. Other projects are web-based exhibition space Bgallery, films at the nearby Callicoon Theater, and grants opportunities for groups and individual artists. 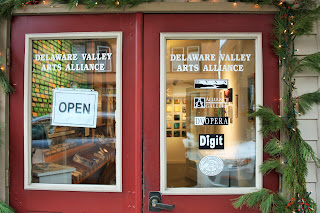 Art in Sixes, with its hundreds of pieces, has a lot to look at. Prepare to get up close and personal. 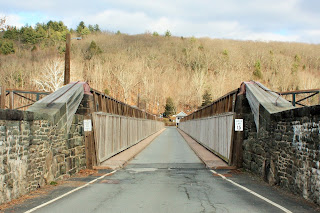 A uniquely complex bridge crosses the Delaware River from the hamlet of Minisink Ford in Sullivan County. One look at the Roebling Delaware Aqueduct’s wooden superstructure, ironwork, ice dams, and toll house and you know there’s considerable history behind this landmark. 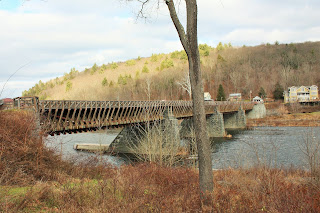 An aqueduct is a structure used to convey water over a long distance, either by a tunnel or by bridge. In this case, where coal-filled canal boats once crossed the Delaware in this water-tight passage, today cars use the same space to drive into Pennsylvania. Construction of the structure was prompted by conflict between the area’s two prominent industries at the time: the canals and timber rafting. Coal-filled canal boats crossed the Delaware River here, but faced oncoming timber that was rafted down the river. In came John A. Roebling, designer of the Brooklyn Bridge, who created four suspension aqueducts for the Delaware and Hudson Canal system. 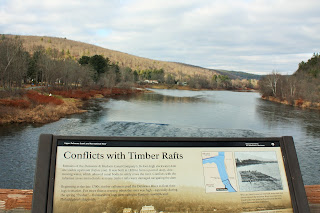 By the end of the canal era, all but this one aqueduct were abandoned. The Minisink Ford structure was spared because of its location and conversion to use as a land bridge. Not only a National Historic Landmark, the bridge was designated as a National Civil Engineering Landmark as well. 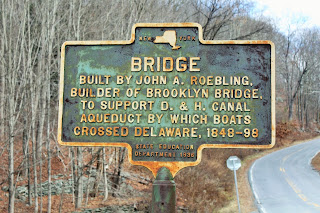 Visitors can drive through the aqueduct or cross it on foot and enter the toll house, a small museum with displays of canal-era history including a sleeping bunk setup. Though the park is small, it's packed with history about the canal and river and their historical role in industry.