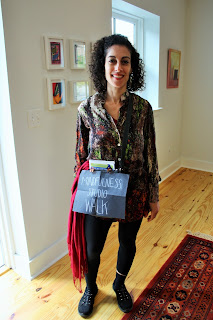 In Chinese philosophy, autumn is a time for turning inward. A season for paying attention to the self’s inner voices and needs after the abundance and energy of summer and in preparation for winter’s unpredictability. During last month’s Newburgh OPEN studios weekend, a free annual tour of the area’s creative spaces, we were surprised to find the opportunity to take take this usually self-guided walk under the direction of movement expert and crafter Ophra Wolf.

Ophra is the face behind Force & Flow Integrated Bodywork, in which she strives to help people find wholeness through creating and connecting healthy bodies, and opening minds and hearts. Her methods for increasing self-awareness and replenishing energy go beyond the familiar yoga, Pilates, and meditation to tools like Feldenkrais, Laban/Bartenieff Movement Analysis, and Contact Improvisation.

Her 2-hour tour, called the Mindfulness Studio Walk, focused not so much on our destination but in the mindfulness of the journey: Looking inward too see what determines your movement and senses, focusing on the ground, surroundings, sounds, and personal space. 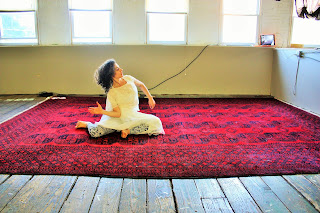 Ophra’s own creative movement was later featured at one of the tour’s stops on Johnes Street, where she performed “Ophra is Pursuing the Pulse” at Sigunik Studio. Her performance was slow and deliberate, making each position mindful and chosen. Performing beside her was Craig Chin, filling the space with a hypnotizing sound, known as ambient music. Craig’s website quotes Brian Eno describing the term ambient music as it “must be able to accommodate many levels of listening attention without enforcing one in particular; it must be as ignorable as it is interesting.” 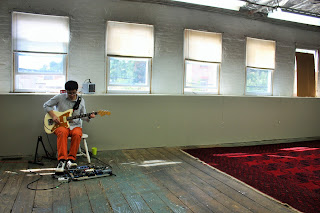 Interpretive dance, which translates human emotions into something visual, is an art medium just as painting or sculpting, but not as understood, perhaps because of its fleeting result. Someone gave me a popular and easily understood example of interpretive dance. Watch the music video for singer Sia’s song Elastic Heart. The two characters acting out a rollercoaster of emotions can be interpreted as a man struggling through the comfort and betrayal of addiction.

Ophra’s performance alongside Craig’s music made for my favorite part of this year’s Newburgh OPEN studio tour. Meeting the artist, having her guide us through a part of her work followed by her performance, made for a unique day filled with art in not one, but many forms.